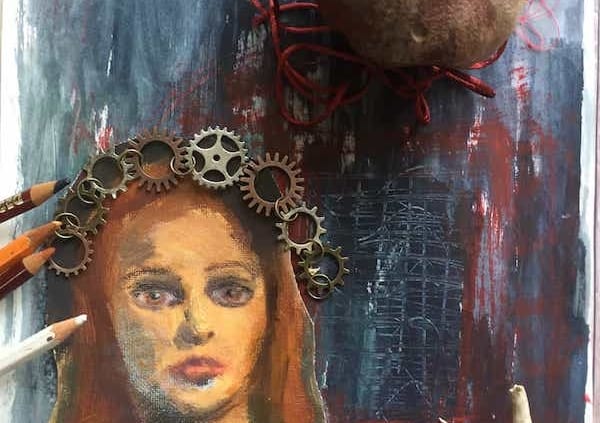 To manifest is to make something visible. In essence, creating is making something known that was not before. Art making is self-actualizing. Through the act of making things, we define aspects of ourselves. By cooking a wonderful dinner for example, we foster the idea of ourselves as capable of cooking a tasty, nutritious meal. Similarly, by making art or building boats etc, we identify ourselves as artists, builders, artisans or other self-defining roles.

How we see ourselves has an impact not only on our self-esteem, but on what we offer those close to us and the communities we live and/or work in. When I worked in settings with people who had been identified as having serious mental illness, I was often struck by the pervasive stigma of being labeled “mentally ill”. In many cases it was as if this designation had taken over and instead of “having” or “experiencing” mental or emotional health issues, people had come to define themselves AS their diagnoses. Saying “I’m Bipolar”is different than saying “I have Bipolar disorder”. One of the most rewarding parts of working in community mental health was watching the transformation and expansion as my clients came to identify themselves ( or aspects of themselves) as “artists”.

The same goes for the many people who think and will often say ”I’m not artistic” or “I don’t have a creative bone in my body”. In most cases these are folks who just haven’t discovered or been encouraged to explore this aspect of self. They may have internalized ideas about who they are, what it means to be creative, and what they can and cannot do.  Frequently people employ creative strategies and don’t even realize it. Given encouragement and the freedom to explore or recognize what they can do (and in some cases, the support of a credentialed art therapist) many people can discover, or uncover their artistic side.

When we feel creative we feel alive. We can make things happen. We can channel physical, mental and spiritual energy in satisfying and life-enhancing ways. This can be an individual and a collaborative process. Imagine coming up with an idea for a community mural to enhance an underserved neighborhood. Then picture enlisting others to help bring this idea to fruition. Then the work itself gets underway and perhaps draws more people in. There is action and energy gathering as things manifest, on an individual level, and/or in ways that engage and define communities.

Donald Seiden, in his book Art Works, called this action stage of the creative process “definition”, and also pointed out that the stages need not be linear. The creative process is organic, alive, and free to change and shift as the work comes into being and as we begin to define it and ourselves.